During our week 5 class and visit to the Fowler Museum, I found interest in the other exhibits of the museum, so I thought it would be exciting to expand on my previous thoughts and get more information on them. One of these exhibits was based around “How Do You See The World?: The Art of Almighty God''. This exhibit has various pieces from the Ghanaian artist Kwame Akoto, who calls himself God Almighty. His art journey started early, at the age of 15, with his first works being mostly signs and other sorts of business related art, as well as decorating different areas and items (AfricanContemporary). He became deeply involved in the “House of Faith Ministries, and based much of his life on this religion, spreading it, and expressing his beliefs in his art (AfricanContemporary). He touches on many issues he sees in his everyday life, which include “drinking, smoking, and prostitution” (The British Museum).

The Art of Almighty God was very different from what I’ve seen in other exhibits. They were mostly pieces focused around African culture, religious beliefs, and had a style that was almost entirely “image and text”, really showing his roots of sign making and clear message influencing his current art. A large collection that stood out to me depicted different animals smoking cigarettes with captions about death resulting from smoking, literally stating “smoking kills” (Fowler). This is a fantastic example of exactly what Almighty God seeks to show and how he does. These pieces looked exactly like a sign would on a street or a store, simply an animal with a cigarette, and clear wording, as well as being based on the issues of cigarettes and the awful results they can cause. Though clear on message, I think almost all art is open to interpretation. To me, it seemed like the main idea was comparing humans to animals, a wide variety of them, and showing how stupid these animals look with a cigarette in their mouth. It looks comedic, but also very sad, since we know the cigarette is harming the animal, but it continues to smoke due to lack of self control and/or simply thinking through instinct. We are supposed to be “above” the wild animals- we can think clearly and know what is morally right or wrong and make the best choices for ourselves, yet we get involved in this self destructive behavior. Furthermore, our harmful choices lead to the destruction of nature and other animals, who have no choice but to deal with the consequences. This is done directly- with our harmful studies and experiments on animals, ranging from blatantly having chimps smoke cigarettes to see the effects, to testing making up on rabbits. It is also indirect consequences, wherein we selfishly try to industrialize and improve our lives, but destroy the habitats of other species 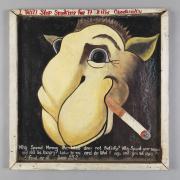